Here I am taking a walk down to the creek.

Probably (in my opinion) the best place to take a walk in the woods is the section of Fairmount Park which borders the Wissahickon Creek. To find information about the origin of the somewhat strange title of this page you'll need to do some reading below. It's interesting history so I hope you have fun. The pictures on this page and the plan (just below) of the Covered Bridge are from the Library of Congress. The text is mine. As far as I know all of the pictures are either in the public domain or I took them myself. If you think or know differently, please email me. There are more pictures at the end of the page.

This plan of the covered bridge (at Thomas Mill Road) is in the American Memories Collection at the Library of Congress.

CATFISH AND WAFFLES - An annotated encyclopedia of places, people and things associated with the Wissahickon Creek and Surrounding Environs


Catfish - was a favorite food, along with waffles, at the many roadhouses that were scattered throughout the Wissahickon Valley in the 1700 and 1800's. The meal did not just consist of catfish and waffles. In general, it usually included catfish, a steak,  chicken, waffles and a dessert. According to one author, the meal is best topped off by a light beer, not wine or water.


Chestnut Hill - This now affluent community borders the Wissahickon Creek on the north side and adjoins Montgomery County on west and Mount Airy on the East.

Germantown - This community borders the north side of the Wissahickon Creek and adjoins Mt. Airy on the West and North Philadelphia on the East.

Finger Span Bridge - Located about one half mile south of Livezey House, the Finger Span Bridge is a modern (1987??) steel bridge, built with a joint to resemble a bent finger. It weighs over 18,000 pounds and is essentially an enclosed iron grate spanning a deep crevice.  The Fingerspan Bridge was installed using a helicopter and dropped into place. 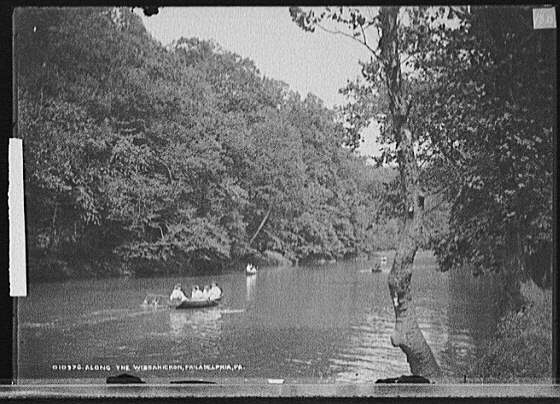 As you can see the creek used to be much deeper than it is today.


Gorgas, Joseph - has a lane named after him in Roxborough.  Gorgas led a group of Seventh Day Adventists who lived with him in the Monastery located on the opposite side of the creek from Monastery Avenue in Roxborough,.  Today the Monastery is used as a stable.


Howell, Daniel - owned one of the grist mills built on the creek about 1710.

Indian Rock - the council stone of the Leni Lenape, forms part of the bluff where today the statue of an Indian, (usually referred to as Tedyuscung) is placed today.

Kelpius, John - Born in 1673, Kelpius was a German mystic who came to the area when he was only 23. He lived in Germantown for some time and then moved to the area of what is today Hermit Lane, between Wissahickon and East Falls. Her Kelpius and his followers built a log cabin.  With Kelpius, Dr. Christopher Witt developed "The Society of the Woman of the Wilderness."  This group utilized symbolism from Revlations, astronomy, horoscopes, magic and practiced divining and their own brand of spiritual medicine.  They became known as a group of strange eccentric hermits.
Around 1890 Samuel Pennypacker bought a lot of books at a public sale and discovered a hymnal that belonged to the group. One stanza from a hymn entitled "The Mourning Song of Complaint of the Solitary Turtle Dove in the place of its trial" goes as follows:

Kelpius died when he was only 35, and most of his followers moved west to Ephrata, Pa, or back to Germantown.


Livezey House- Glen Fern is the name given to the former Livezey house still standing today at the bottom of Allen's Lane.

Mills - at one time the Wissahickon Creek supported over 50 mills of various types. Grist mills, fulling mills and paper mills were most common. See entries under Rittenhouse, Holgate, and Howell, who were owners and builders of some of these mills.. The function of a grist mill is to grind corn and other foodstuffs into usuable form, while a fulling mill removes animal grease from the sheared wool of sheep. There was also a nail mill, at least one fabric mill and a cotton wadding mill. From the late 1690's until the early 1800's the mills along the Wissahickon provided a source of income for many of the families in the area. Whole communities formed around the central core of the community which was the mill. Rittenhouse Town is the sole surviving community of what had been a bustling industrial area.

Mom Rinker's Rock - is reputed to be the spot where Mom  Rinker sat as she spied for the colonists during the Revolutionary war. She is said to have sent information down to the waiting revolutionary soldiers in her ball of yarn.


Monastery - This building, built about 1750, was used by Joseph Gorgas and his followers as a retreat from the problems of everyday life. 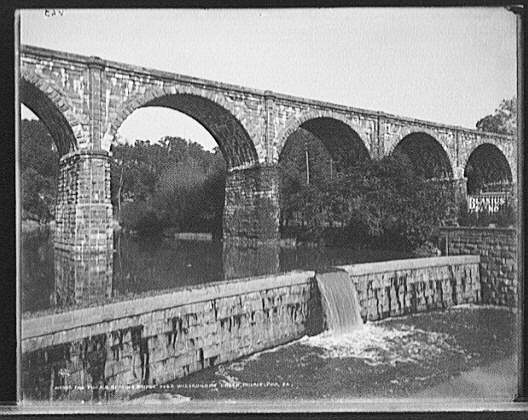 Pastorious, Francis Daniel - the founder of Germantown, who came to the area about 1683. Today Pastorius Park is named after him. He was given the land  by William Penn for himself and his "German Company."


Penn, William -  Born in England, Penn's father was a friend of the King. Penn was given the land in the colonies by the King as part of payment for a debt the King owed his father.  As we know, William Penn has the state named after him and made tremendous contributions to the future United States. Penn then came to America and purchased the land from the Leni Lenape indians, even though he probably did not need to do this.

Penn's final tribute to the Wissahickon area was an amount of money (100,000 pounds) which he left to the city in his will. The purpose of which is explained in this excerpt from his will:
"Having considered the covering of a ground plot with buildings and pavements, which carry off most of the rain, and prevent its soaking into the earth and renewing and pruifying the springs, whence the water of the wells must gradually grow worse, and in time be unfit for use... I recommend that at the end of the first hundred years, if not done before, the city employ a part of the 100,000 pounds sterling in bringing, by pipes, the water of Wissahickon Creek into town, so as to supply the inhabitants."

Poe, Edgar Allen - During the time that Poe lived in Philadelphia he visited the Wissachickon Creek at least once and wrote a short essay that was published in the ECHO. Read this piece, also called The Elk, here.

Rittenhouse Town - Today, this small  community of buildings is what has survived from the Rittenhouse paper mill and its ancillary buildings. It has been developed and restored by a group and today offers tours and information sessions at the site. Rittenhouse Town is located at Lincoln Drive and Rittenhouse Street.


Rittenhouse, David. Was an enthusiastic astronomer, businessman, scientist and patriot. . Rittenhouse tried farming,  built clocks and then studied the skies.  Later in life Rittenhouse was State Treasurer, Director of the Mint and was the President of the American Philosophical Society.


Rittenhouse Mill - This mill was first a grist mill and then began making paper. It was the first paper mill in the colonies.  See Rittenhouse, David. 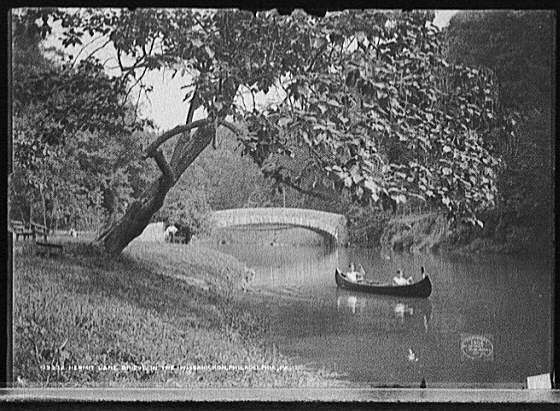 Robeson's Mill - This land and mill were then sold to John Townsend in 1686 and to Robert Turner in 1691.

Roxborough - Supposedly the name for this community was derived from John Kelpius discovering foxes digging in the basement of his log cabin. Because a great deal of rocks were in the walls, he named the area Rocksborrow.  Today Roxborough forms the eastern boundary of the Wissahickon Valley, along with Andorra, Wissahickon and East Falls.

Tedyuscung - the famous Indian who was immortalized in a statue still standing just off Forbidden Drive and Rex Avenue overlooking the valley below.  Originally made of wood, the statue was replaced by a concrete indian statue donated by Mr. & Mrs. Henry.

Valley Green Inn - More later on the Inn, but try this link for a picture and original plans of the building. Plans of the Inn (housed at the Library of Congress).


Wissahiccon- is how Edgar Allen Poe spelled the name of the creek in his essay regarding the tranquility of the creek and his probable dream about the Elk.  See the Appendix for a complete copy of this essay.

Wissahickon - the name of the creek and the community of Wissahickon derive from either the Leni Lenape words for yellow colored stream -Wisaucksickan, or from Wisamickan, the Indian word for Catfish Creek. A great deal of industrial development  took place along the Wissahickon Valley in the 1700Æs and mid 1800Æs, most in the tremendous building boom of mills. A combination of romantic movements, nature lovers and some visits and reports from at least two famous people to the Valley led to a revolt against the industrialization. In 1870, the Fairmount Park Commission started an aggressive campaign to move the park area back into a natural area. The Park commission purchased most of the mills and almost immediately tore them down.  Franny Kemple and Edgar Allen Poe both wrote of the beauty of the park. See separate entries for these two people.


Pictures from the Library of Congress

This page has had - 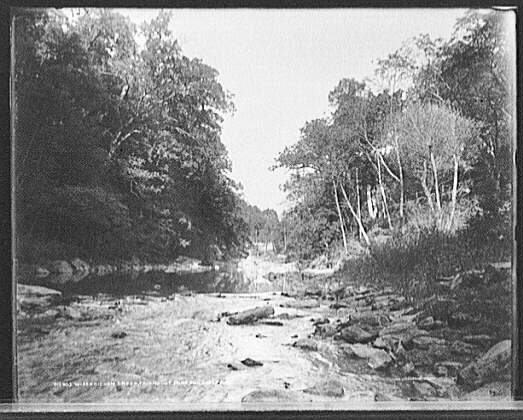 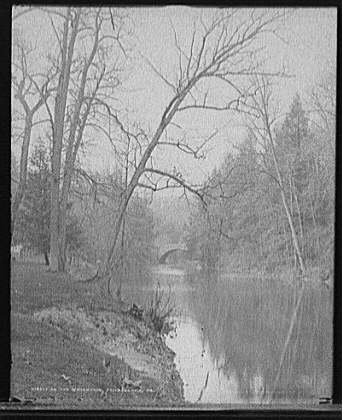 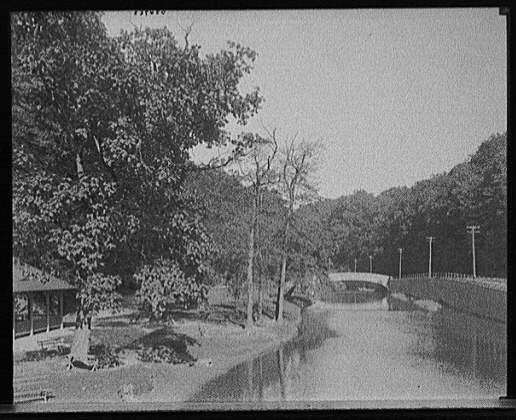 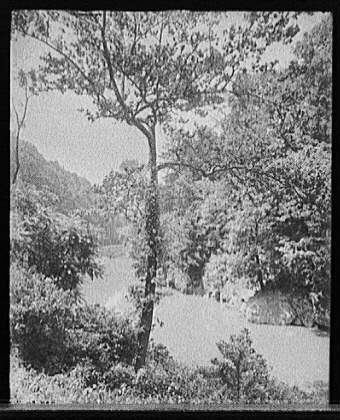 Pictures I have taken of the covered bridge... 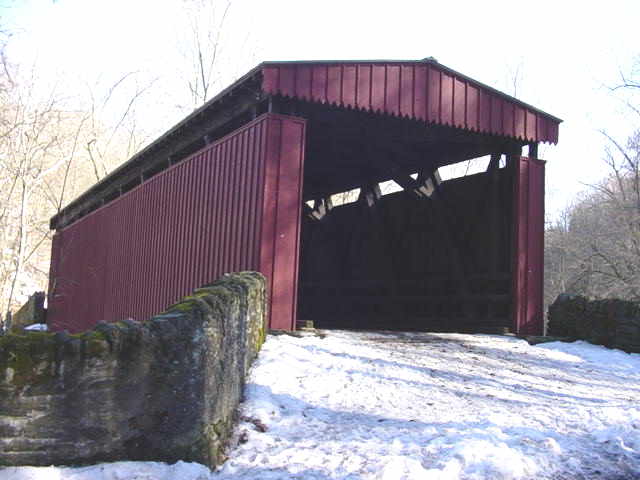 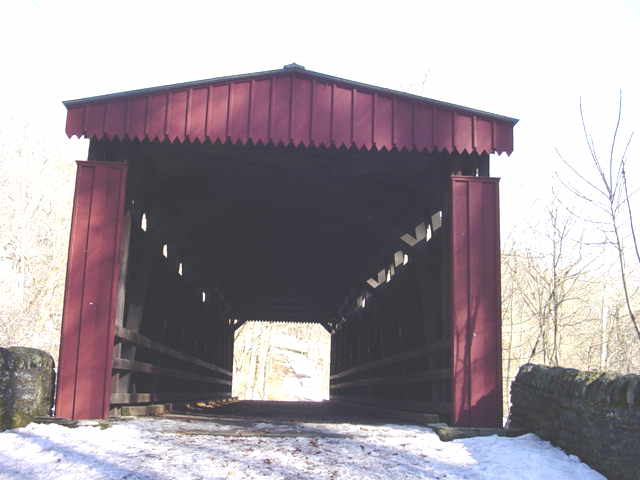 And finally some music written about the creek.... most curious.

The Wissahickon Restoration Volunteer's - a group that works to improve the park.

More on the Wissahickon around Blue Bell Hill and Rittenhousetown...